Join us in Scottsdale
at Funk Beach
New seasons reboot August 29
Register anytime during the current season to secure a spot
for the funk flavored good times of the next season.
Leagues are at Funk Beach
Oak St / 64th St
6398 E Oak St Scottsdale, 85257 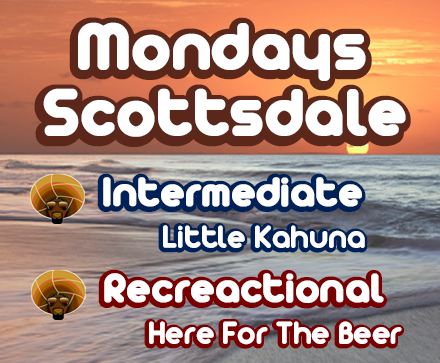 Prizes for the best regular season record and
​winners of the season finale tournament.
RULES and guidelines

​Little Kahuna Intermediate
- Mid Intermediate level (a spectrum of levels: BB/B Major/B minor & C looking to learn and grow)
- Teams need one female minimum on the team.
​*A team may play with three men + a missing player if needed in a pinch.

Hands Fly Free
Full clean rules of play observed with one exception:
- We do not call/judge hand sets that stay on your side of the net. Practice your hand sets free of stress.
​A bad hand set that crosses the net however IS a foul, and point awarded to opponent.

Full clean rules of play explained - don't worry, you got this!
- Net contact = play over, point for the opponent *this means any net contact - there is no such thing as "reasonable net contact".
That is crap monkey ball and is dangerous. We seek to protect our players and help them aspire to understand the real game.
- Contact with opponents under the net is a point for them if it hindered them; their call.
- No lifting the ball *scooping it or using open, up-faced palms that the ball does not rebound off of crisply.
- No throwing the ball *means using "sticky" fingertips to slightly direct the ball at the end of ball contact, giving it a little extra stink.
- No open hand finger dinks/directs/tips/flicks. Ball must be contacted crisp and rebound off of the hand, or knuckled fingers used in tight spots.
- Open 2 hand defense, passing and shooting the ball is 100% OK as long as it is not a foul. A double contact that spins too much is a foul.
- A hard driven ball can be legally double contacted or lifted. *Hard driven means coming off of an overhand spike at significant velocity.
- No attacking the serve *Attacking is blocking the serve or spiking it back down from above the horizontal plane of the net.
- A block attempt touch on the ball does NOT count as one of a team's three allowed ball contacts.
- Balls that cross the vertical net plane out side of the antennae or touch antennae are ruled "Out" and are a point for the opponent.
- Teams do not have to rotate in Intermediate leagues.