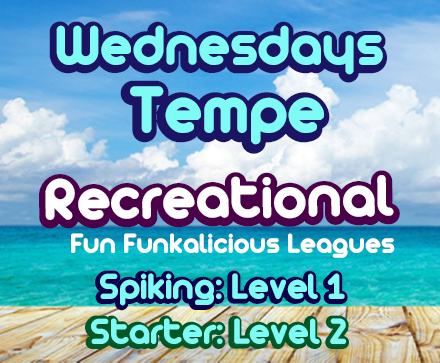 First season special Thank You perks:
- Team fee is a super discounted $150 to get Funky
- Every player gets a Funk Beach t-shirt (up to 6 per team)
​
Prizes for the winners of the season finale tournament.
Funk Receational Leagues rules and guidelines

​Rules, Rule Rules
Minimal rules are enforced in Rec leagues
​for safety, basic fairness and to keep it on the rails:

No contact with opponents under the net allowed
- If a player contacts an opponent under the net the rally is over, play stops and it is point for the opponent.
This rule is essential for safety.

- Every player on the team must take a turn serving, evenly and without skipping a player.

- A block attempt touch on the ball does NOT count as one of a team's three allowed ball contacts.

- IN STARTER REC ONLY:
Teams must rotate a NEW players into new positions each time a new server is up for the team, and in order through all players
*Back row players may not spike the ball down during their back row rotation - only hits up and over.
*Players may not use the indoor swap tactic to change position as the ball is served.